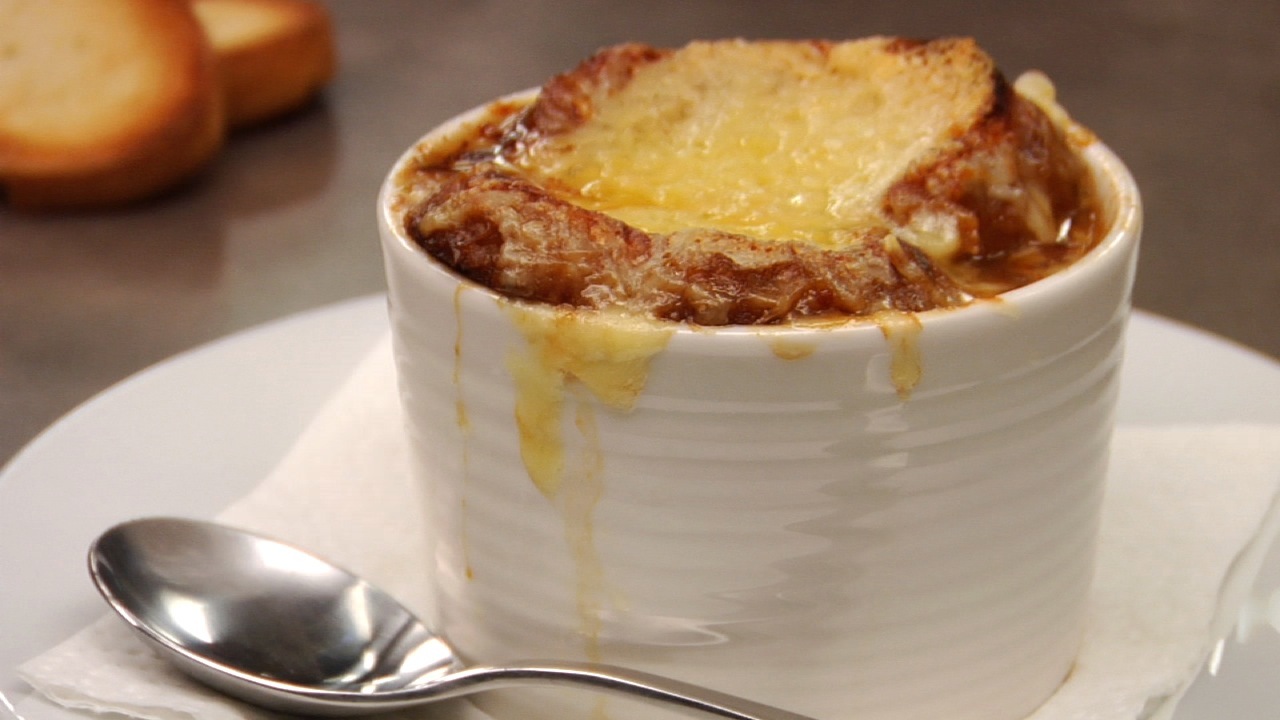 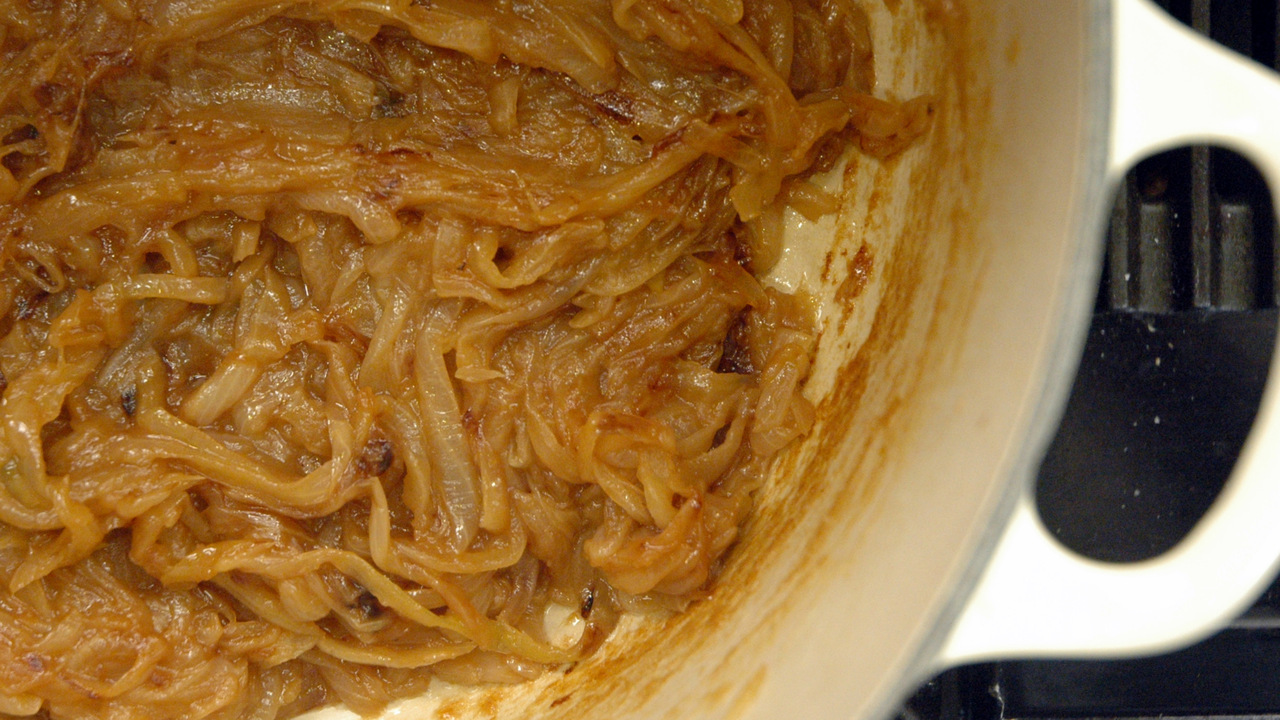 To make the caramelized onions, trim the ends off the onions, cut them in half vertically and peel. Remove the core and thinly slice the onion vertically (from the core to the opposite end).

Preheat a large, heavy-bottomed pan over high heat. Once hot, add the oil and butter and onions. Cover the onions to help bring out some of their moisture.

After about five minutes, uncover, add the salt, and stir. Leave uncovered and reduce the heat to medium low. Continue to stir from time to time, so they brown evenly. This will take between 45 minutes to an hour.

If the onions start to brown unevenly, you can add a little bit of water. This will help to even out the color. As they start to caramelize, you will need to stir more frequently. When done, they will sort of melt into each other and be a rich brown color. 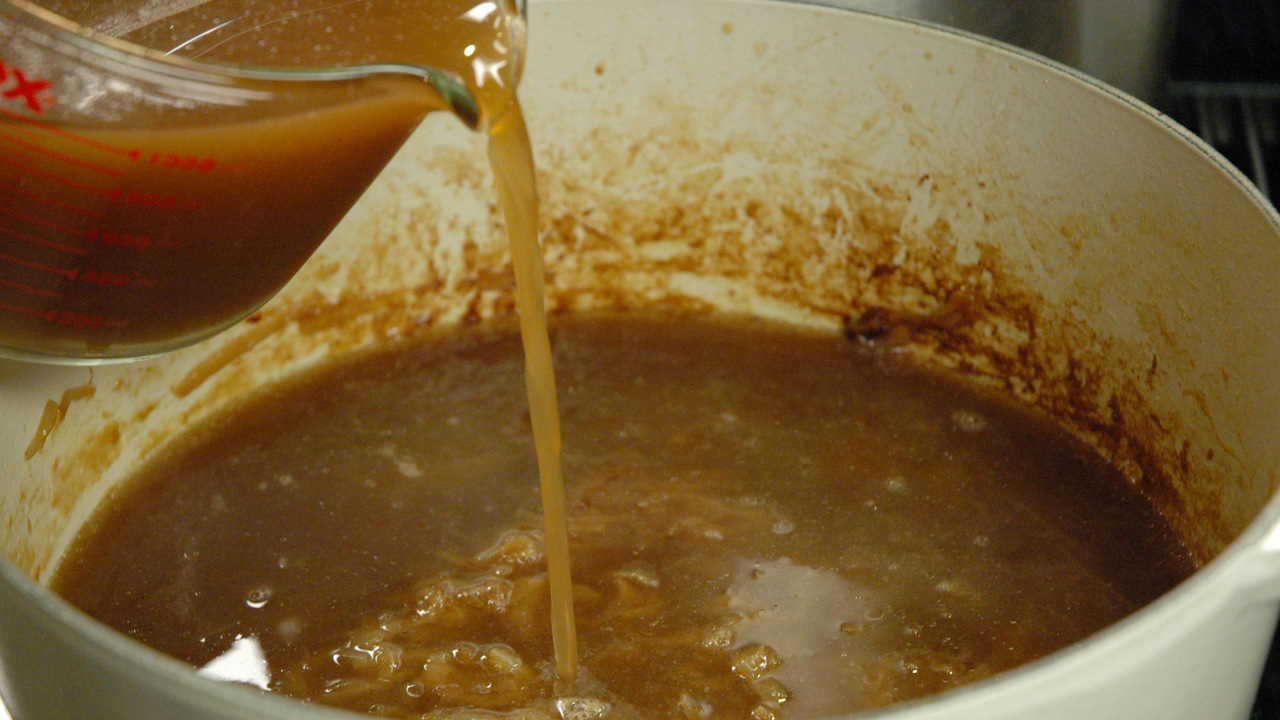 Once the onions are caramelized, the next step is to deglaze the pot with the sherry. Scrape up any browned bits from the bottom of the pan and then add the stock. Add the thyme and bay leaf and gently bring to a simmer. 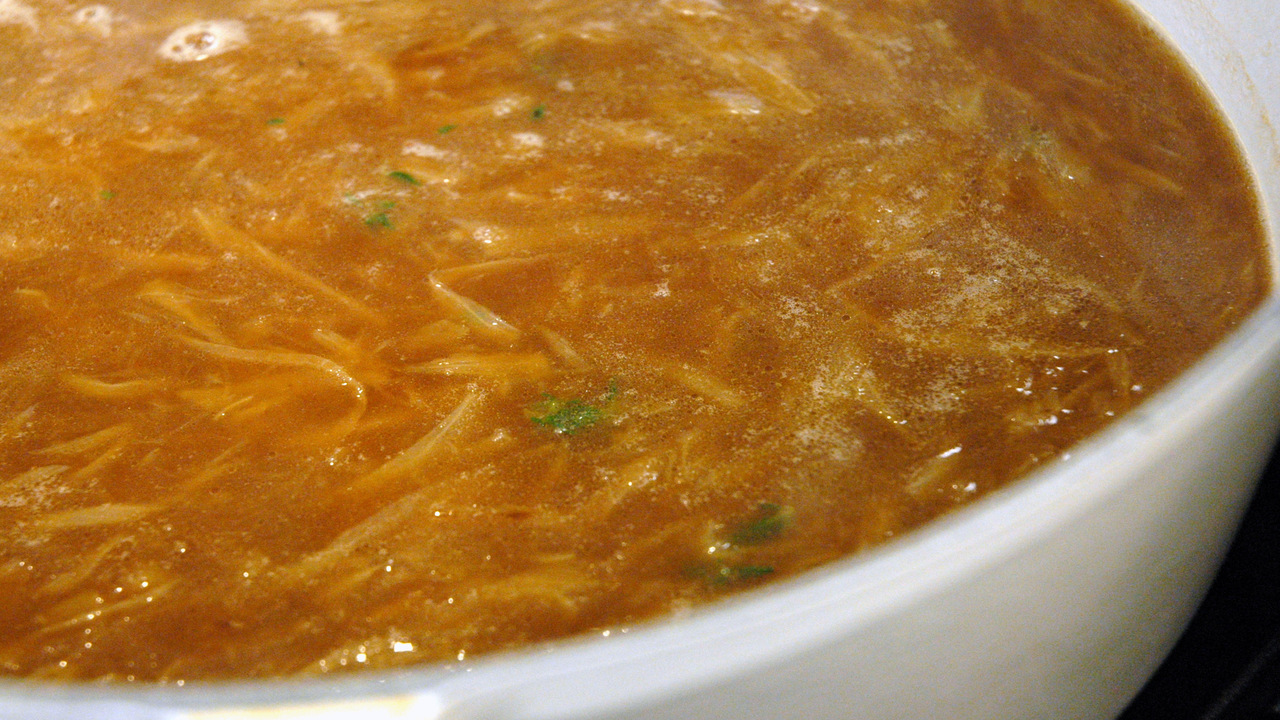 Gently bring the soup to a simmer and taste for seasoning. Let the soup simmer for about 15 minutes to develop flavor. 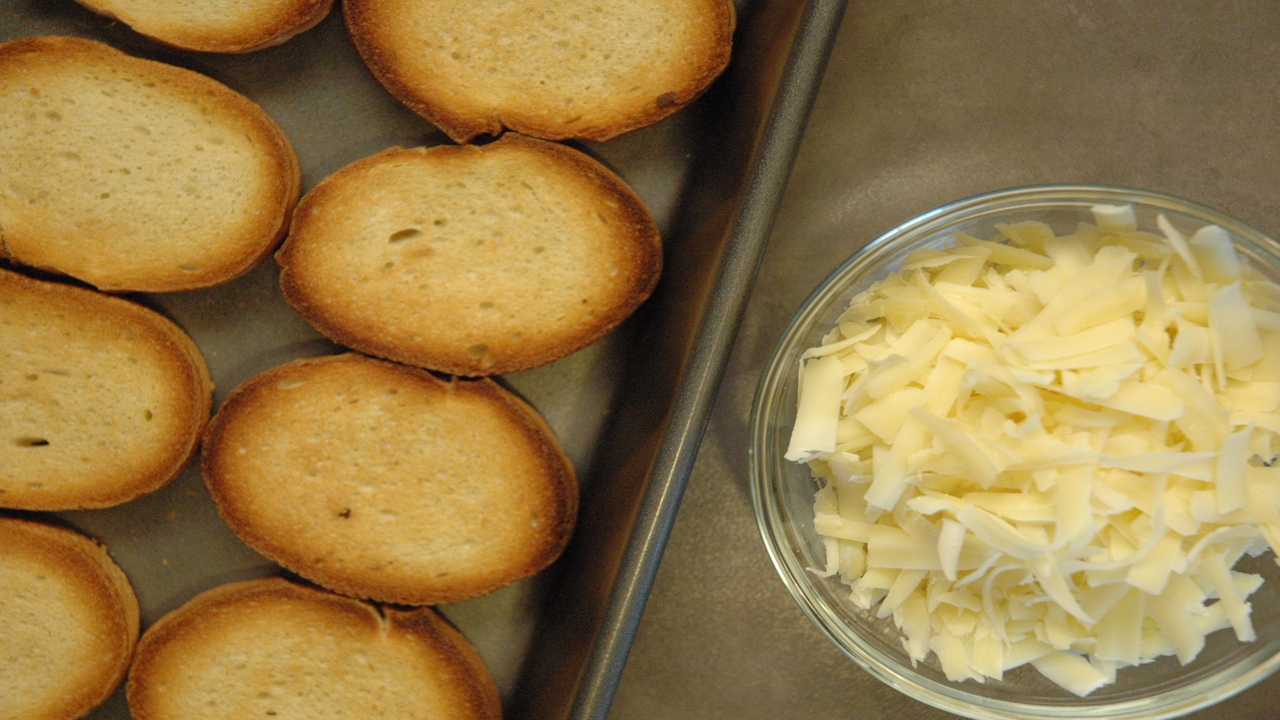 While the soup simmers, slice the baguette into about 1/2" -inch rounds. Place them onto a baking tray and toast both sides under the broiler until light golden.

Grate or slice the Gruyère* cheese. Set aside. 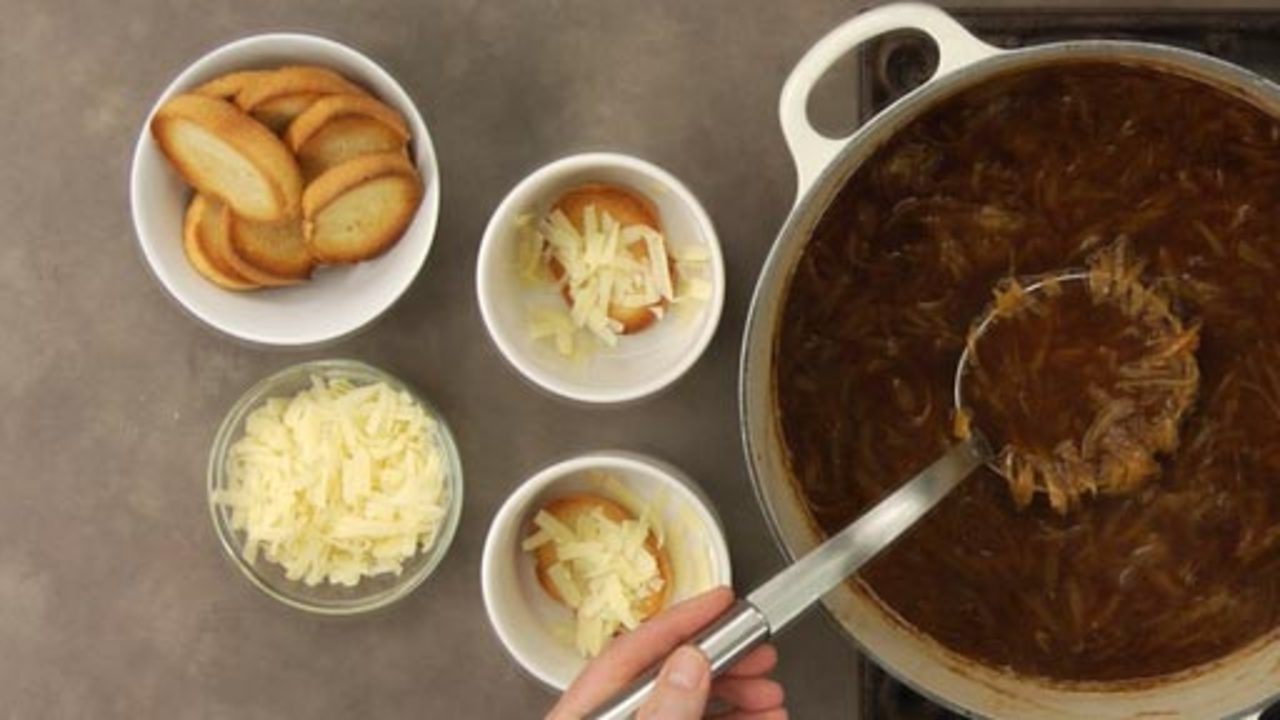 Once the soup has simmered for about 15 minutes, finish with the apple cider vinegar. Taste for seasoning one last time. 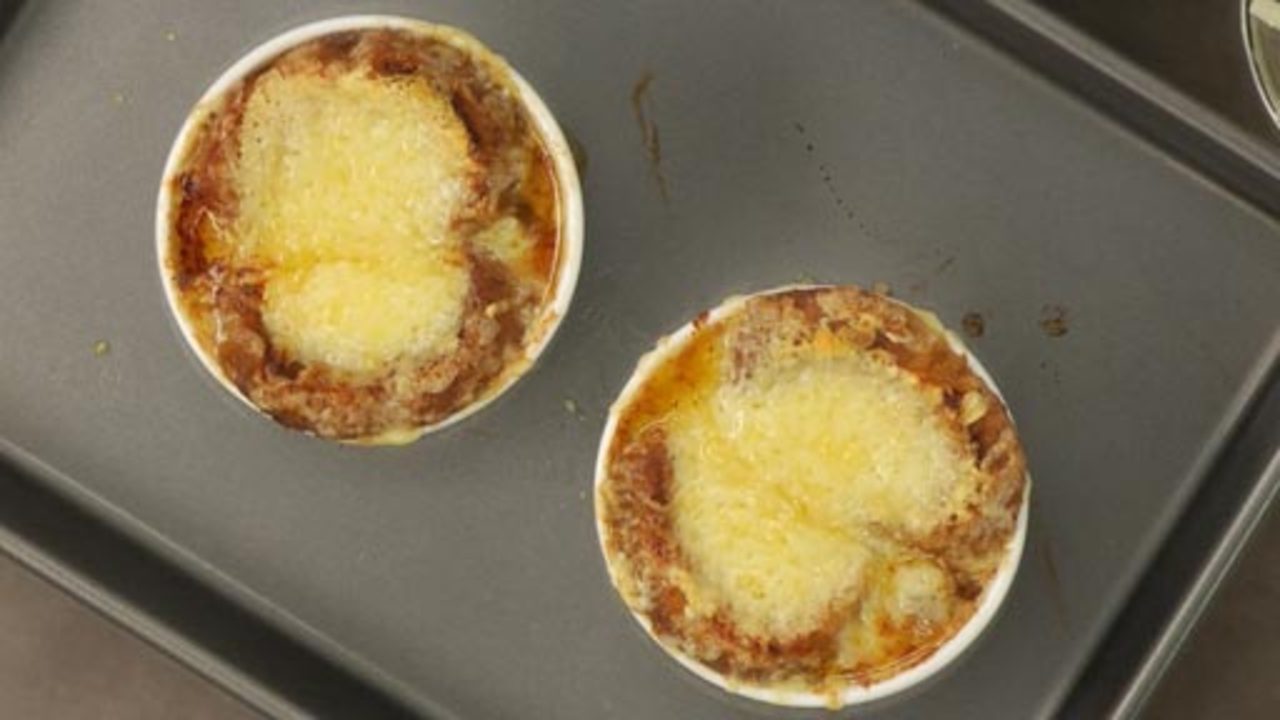 Place the tray under the broiler until the cheese melts and turns nice and golden.

Remove and serve immediately on a small plate, lined with a napkin (so the bowl doesn’t slide around). Serve with a small cloth to prevent burning yourself on the hot bowl.

*Quality provolone, Swiss, mozzarella or any good melting cheese can be substituted for Gruyère – even a mix of cheeses would be nice.