Lessons from the Kitchen

Join Chef Antwon Brinson and Chef Ken Rubin as they discuss the vital link between life skills and success as a culinary professional.

In this live event, Chef Antwon Brinson will share his work and the approach he takes to train and mentor people from all walks of life—to help them find their voice and emerge with a strong sense of purpose and value.

We will talk about the skills needed to stay driven towards a goal, maintain a positive mindset, and to adapt to our rapidly changing times. 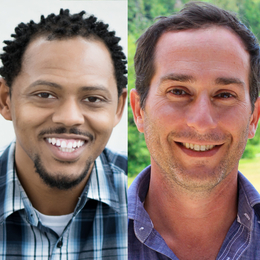 Chef Antwon Brinson had the good fortune of growing up in a household fueled by pure passion. His mother was a dedicated foster parent who raised over 250 kids.

Antwon began his professional training in 2001 at the Culinary Institute of America in Hyde Park, NY. Then in 2006, he enrolled in a rigorous three-year apprenticeship program under several Master Chef’s at the legendary Greenbrier Resort in West Virginia. One of Antwon’s greatest achievements here was managing the resort’s 44-acre farm production kitchen.

In 2018, Antwon launched his first company, Culinary Concepts AB, with the intention to create a socially-minded company that focuses on developing individuals’ passions and abilities by teaching life skills through culinary arts. Since conception, He has had the honor of helping over 75 students to achieve milestones in life and to establish long-term goals.

Aside from living his passion every single day, Antwon believes in investing in his community as much as possible. Currently, he is on three boards and two committees. Antwon also spends his time mentoring high school students who are looking for a career pathway through culinary and start up’s in the food and beverage space.

Ken Rubin is a nationally recognized chef, educator, food anthropologist and with over 25 years of broad culinary industry experience. He currently serves as the Chief Culinary Officer at Rouxbe, the world’s leading online culinary school that has helped over 600,000 people learn to cook better. Rouxbe delivers technique focused culinary instruction to home cooks, professional cooks and healthcare professionals around the world through leading edge partnerships with organizations such as Marriott International, Compass USA, The James Beard Foundation, Hyatt Hotels, Trilogy Health Services, Wegmans, The American College of Lifestyle Medicine and many others.