Bring all of your questions for Chef Ken and Chef Scott! 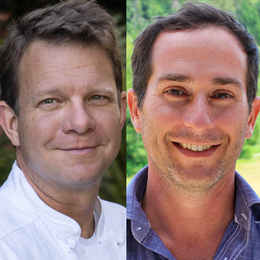 Join Chef Ken Rubin and Chef Scott Samuel in their virtual offices as they welcome all of your questions. This event was created for you and we encourage you to ask anything – from cooking techniques to course-specific questions, to how to turn your cooking passion into profit or simply hearing the perspective of a professional chef, Chef Ken and Scott are ready to answer them all.

Spanning nearly 30 years, Chef Scott Samuel’s distinguished culinary career has included leadership roles in culinary innovation, instruction, operations, and program development. Prior to joining the Rouxbe team, Scott served as the Director of Culinary Innovation for Zipongo, a digital health company focused on making it easier to eat well. Samuel was responsible for all things culinary within Zipongo, from working with enterprise clients to teaching cooking classes and developing recipes that are both healthy and taste amazing.

Scott previously worked with The Culinary Institute of America as the Executive Chef of the college’s Strategic Initiatives Group and as an instructor in the culinary arts degree program. During that time, he coordinated the food operations for the culinary college’s industry leadership conferences, including Menus of Change, in partnership with the Harvard T.H. Chan School of Public Health. He also played a key role in developing and promoting the CIA’s Menus of Change Principles. These guidelines—which help chefs, restaurateurs and other foodservice operators integrate optimal nutrition into the dishes they serve—have been assimilated into the menus of chain and independent restaurants as well as colleges and other institutional foodservice operations across the country.

Scott earned a Bachelor’s Degree in Hotel & Restaurant Administration from Washington State University and spent a summer studying at the Cesar Ritz Institute of Hotel Management in Switzerland. His initial training as a chef began at (the former) Gerard’s Relais de Lyon, in Bothell, Washington, where the two chefs gave him a hands-on education in the art of French cooking.

Chef Ken Rubin is a nationally recognized chef, educator, food anthropologist and with over 25 years of broad culinary industry experience. He currently serves as the Chief Culinary Officer at Rouxbe, the world’s leading online culinary school that has helped over 600,000 people learn to cook better. Rouxbe delivers technique focused culinary instruction to home cooks, professional cooks and healthcare professionals around the world through leading edge partnerships with organizations such as Marriott International, Compass USA, The James Beard Foundation, Hyatt Hotels, Trilogy Health Services, Wegmans, The American College of Lifestyle Medicine and many others.