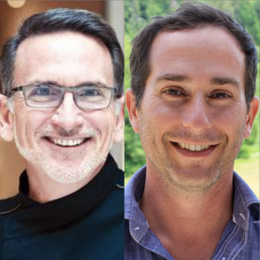 Success in life is all predicated on carving out a formula of balance in your personal and professional life - the same notion of balance holds true for success in the kitchen with building flavor in a dish. Chef Moonen will open the discussion with his definition of balance in cuisine and our environment and then open it up for questions and input.

Sweet, sour, bitter, salty, piquant and umami for our palate…and texture, temperature and appearance. When you invite a balanced combination of these elements to a dish, you embrace a full sensory experience, or what Chef Moonen calls 'a party in your mouth.' Just like balanced and regenerative ecosystems are key for a healthy environment, every living thing on our planet is linked to one another. In these inter-connections, we find diversity, new discoveries, opportunity for new directions, and the inherent beauty in the foods we share.

Chef Rick Moonen has been a leader in the culinary world for several decades through his early success with “Oceana” in New York City, “RM Seafood”, and many other ventures throughout his career which distinguished him as the “Godfather of Sustainability”. Chef Moonen will be supporting our culinary leadership providing insights and innovation for our industry level e-learning products, as well as live events and business development for the culinary program for all concepts.

Chef Moonen is a James Beard Award winner and one of the country’s leading culinary authority on seafood, receiving the coveted 3-star New York Times rating five times, and has been inducted into the American Culinary Hall of Fame.

Chef Moonen is a critically acclaimed author featured in numerous publications including Food & Wine, Bon Appetit, and USA Today, and is recognized for his appearances on The Food Network, The Oprah Winfrey Show, Top Chef Masters, Good Morning America, CNN and more.

Chef Ken Rubin is a nationally recognized chef, educator, food anthropologist and with over 25 years of broad culinary industry experience. He currently serves as the Chief Culinary Officer at Rouxbe, the world’s leading online culinary school that has helped over 600,000 people learn to cook better. Rouxbe delivers technique focused culinary instruction to home cooks, professional cooks and healthcare professionals around the world through leading edge partnerships with organizations such as Marriott International, Compass USA, The James Beard Foundation, Hyatt Hotels, Trilogy Health Services, Wegmans, The American College of Lifestyle Medicine and many others.