A showcase in culinary creativity to drive plant-forward meals.

One of the biggest struggles for WFPB cooks is pleasing their omnivorous families and friends. Chef Barton Seaver and Chef Eric Wynkoop will offer creative solutions for reducing meat consumption and replacing it with seafood and plant based recipes.

Barton and Eric will offer recipes and suggestions for how to make healthier swaps within tried and true family favorite comfort foods and some unique flavor combinations drawing from their diverse and diametric culinary experience.

Come and enjoy the lively conversation between these two chefs, and bring your toughest questions for them to debate! 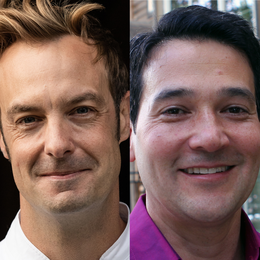 11:00 AM - 12:00 PM PST
Register for this event and we will send you a reminder before it begins as well as a link to the recording when available.
Share this Event: