Join Barton as he chats with the “Queen of Greens”

In part 2 of our special Around the Table series, Chef Barton Seaver and award winning author Deborah Madison will explore the tastes, colors and recipes that feature the best of vegetable-forward cuisine. They will discuss Deborah’s memoir, An Onion in my Pocket: My Life with Vegetables, the rise of vegetable-forward cooking, and their tips for how to eat well. And Barton will prepare selected recipes from Deborah’s collections.

Join us for this special event to explore the rise of the vegetarian movement and how we eat today. 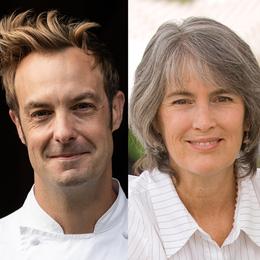 Deborah Madison is the award-winning author of fourteen cookbooks, including The New Vegetarian Cooking for Everyone and Vegetable Literacy. Her books have received four James Beard Foundation awards and five awards from the IACP; in 2016 she was inducted into the James Beard Foundation Cookbook Hall of Fame.

Connecting people to the food they eat, its source and its history, has long been her work, and writing is one way to reveal the deeper culture of food. Deborah’s interests lay with issues of biodiversity, botany, seasonal and local eating, farmers markets, small and mid-scale farming, farmers and ranchers, gardens and gardeners.

Deborah’s latest book, An Onion in My Pocket is as much the story of the evolution of American foodways as it is the memoir of the woman at the forefront. It is a deeply personal look at the rise of vegetable-forward cooking, and a manifesto for how to eat well.

Deborah has been involved with Slow Food in various capacities from its beginning in the US, served on the board of the Seed Savers Exchange, was co-director of the Monte del Sol Edible Kitchen Garden in Santa Fe, New Mexico, and she is a long term board member of the Southwest Grassfed Livestock Alliance (SWGLA), among other positions. For over thirty years she’s lived in Northern New Mexico with her husband, painter Patrick McFarlin.