Join Barton as he chats with Ana Sortun - the self described Mom, chef, farmers wife, restaurant owner, and author.

In part 3 of our special Around the Table series, Chef Barton Seaver welcomes award winning Chef Ana Sortun, of Oleana, Sofra bakery & Sarma. They will discuss Ana's lauded cookbooks (Soframiz and Spice), their favorite herbs and spices, and their tips for how to eat, cook, and live well.

Join us for this special event to explore local and global flavors and how we eat today. 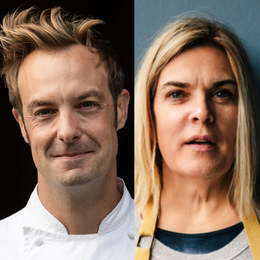 Hailed as one of the country’s “most creative fusion practitioners,” Ana Sortun was named the Best Chef Northeast by the James Beard Foundation in 2005 and has been lauded as “deeply inventive” by the New York Times, and “a culinary genius” by Boston Magazine and in Saveur. In 2016 and 2017 she was a James Beard semi finalist for Best Chef, general excellence.

Ana has won renown for her two cookbooks Soframiz and Spice.

Trained at La Varenne Ecole de Cuisine de Paris, Sortun opened Moncef Medebs Aigo Bistro in Concord, and then honed her skills at 8 Holyoke and Casablanca in Harvard Square. She opened Oleana in 2001 where her creative take on the rustic-traditional cuisines of the Middle East and her interpretation of the flavors of Turkey continue to receive rave reviews.

Siena Farms, owned by Ana’s husband, Chris Kurth and named for their daughter, provides produce to the restaurants and underscores her commitment to fresh ingredients and healthy food. Ana is also involved with Oldways Preservation Trust which fosters good health by supporting the cultural food traditions of the Middle East and Mediterranean.