Join Chef Jacquy Pfeiffer as he dives into his old recipe books and dusts off his Springerle machine to reveal his holiday favorites. As always, Chef Jacquy is joined by Chef Scott Samuel for this lively conversation.

Learn to craft traditional Springerle shortbread cookies and other cherished treats, including sugar-glazed gingerbread stars with candied oranges, an array of savory kougelopfs, a luscious black forest yule log, hazelnut chocolate truffles, and much much more!

Bring all your questions, and a healthy appetite for this mouth-watering event. 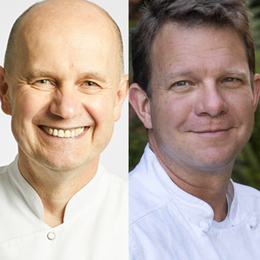 Chef Jacquy Pfeiffer’s exceptional career began with an apprenticeship in Alsace at the famous Jean Clauss Pâtisserie. Following his apprenticeship in Strasbourg, Pfeiffer established himself as a leading figure in the art of pastry, working with some world-renowned families and establishments. Some of these include the Royal Family in Riyadh, Saudi Arabia; the Sultan of Brunei; the Hyatt Regency, Hong Kong; a prestigious pastry shop in Palo Alto, California; and the Fairmont and Sheraton hotels in Chicago, Illinois. These experiences led Chef Pfeiffer to teach and consult in numerous of the most prominent properties and companies worldwide, such as the Ritz-Carlton and Four Seasons Hotels and Resorts, the Atlantis Hotel in the Bahamas, and the Adolphus Hotel in Dallas, Texas.

Spanning nearly 30 years, Chef Scott Samuel’s distinguished culinary career has included leadership roles in culinary innovation, instruction, operations, and program development. Before joining Rouxbe as the Vice President of Culinary, Scott served as the Director of Culinary Innovation for Zipongo; a digital health company focused on making it easier to eat well. Prior to Zipongo, Scott worked with The Culinary Institute of America as the Executive Chef of the college’s Strategic Initiatives Group and as an instructor in the culinary arts degree program, where he coordinated the food operations for the culinary college’s industry leadership conferences, including Menus of Change, in partnership with the Harvard T.H. Chan School of Public Health.

12:00 pm Pacific, 3:00 pm Eastern
Register for this event and we will send you a reminder before it begins as well as a link to the recording when available.
Add to Your Calendar:
Apple Calendar (.ics)
Google Calendar
Share this Event: