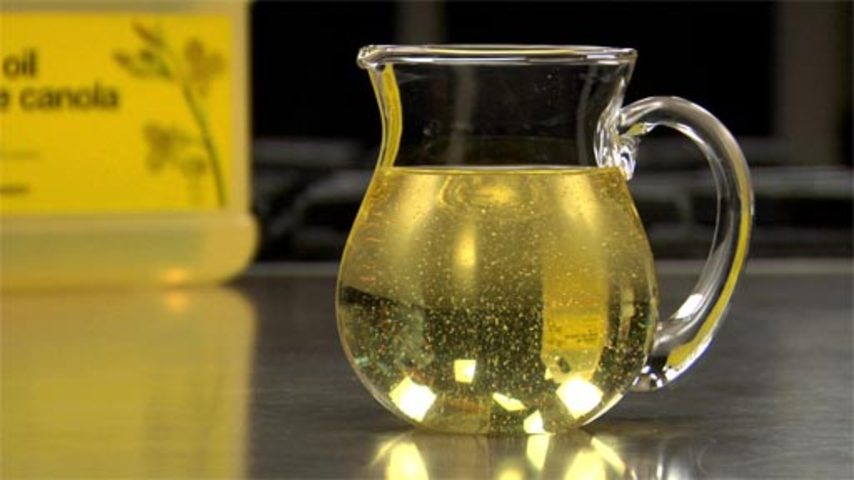 When choosing a fat or oil for frying, the most important thing to be aware of is its smoke point. In order for the outer crusts of foods to develop that golden, dry and desirable crispy crust, they need to be cooked between 350 – 375 degrees Fahrenheit (176 to 190 degrees Celsius); therefore, cooking with a fat or oil with a smoke point higher than this is highly recommended.

Why is this important? The smoke point of a fat or oil is the temperature at which it begins to break down and denature. At this point, visible smoke, unpleasant fumes and carcinogens form. Fats or oils with smoke points at lower than ideal frying temperatures, such as whole butter and some types of olive oils can begin to smoke, burn and de-nature rather quickly. The high temperature will also cause the flavor of the fat or oil to go off, which will ultimately affect the flavor of the food. For these reasons, choosing a fat with a high smoke point is best.

The type of oil you choose is really a matter of preference. Canola oil, grapeseed oil, safflower oil and sunflower oil are common frying oils. They all have various health benefits and are quite neutral in flavor. Peanut oil offers a bit more flavor and is also a common frying oil. If we look at the Mediterranean culture for example, they rely almost solely on refined olive oil and even some types of extra-virgin olive oils to fry all of their foods. Not only does olive oil offer great flavor; but, when proper care is taken to slowly heat the oil, as well as carefully strain it after cooking, olive oil can be re-used several times. Coconut oil can is another popular oil used for cooking. It also happens to provide nice flavor to foods. Animal fats, such as a good lard and goose or duck fat can also provide flavor to food; however, their smoke points are in fact lower than refined or vegetable oils, and due to their high saturated fat content, their health effects are debated. In general, the less saturated in fat the oil is, the higher its smoke point will be.

The healthiest choice also depends on how often you plan to re-use the oil. Each time food is fried in the same oil, the smoke point is irreversibly lowered due to the microscopic debris that is present, so you are not able to heat the oil as high the next time you cook with it. By choosing an oil with a higher smoke point, you will be able to use it more than once.

To tell if re-used oil has gone off, there are a few things to look for. First, oil becomes darker each time it is used because both the oil and the leftover food particles burn once the oil is reheated. If any sediment happens to collect on the bottom of the jar, make sure to strain it out before using it. The oil should not smell rancid, burnt or of the foods that were previously cooked in it. Older oil will also have a very thick consistency. Finally, when reheating used oil, if it begins to smoke before it reaches the proper frying temperature, make sure to discard it as it will no longer fry effectively. Food that is cooked in overused oil will take longer to cook and will absorb too much grease and will taste foul.