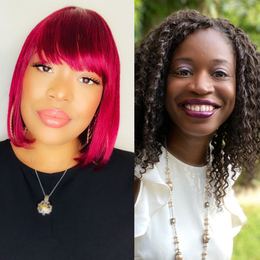 I love how enlightening this conversation is. How can we politely ask "how many women are included or represented" in your operation?

So me very quickly, um over the numerous hotels hospitals restaurants and even in the private sector that I've worked in. It's pretty much been me. From as far as that I can see I literally came up in the ranks me being an example for myself and for other people who didn't see another black woman or just another woman in the operation and then especially getting into the management side of things where I was actually running teams, you know, maintaining the entire restaurant. So for pretty much all of my cooking career, it's really been just me which is why I love being in these spaces and having these conversations because now the world is a unnotice the industry is on notice that more women, you know more women of color minorities. They need to be seen and they also need to be displayed and respected because we're killing them out there. So My my organization the Philadelphia Inquirer does actually does really well. You know, we're about 55% women and we have quite a few black women who are in leadership positions me being one of them writ large across the industry. I'm one of only maybe three black food editors in the country. Tony Tipton being one of them who's at Cook's Country and Don Davis who's the editor-in-chief of Bon Appetit and there's me. Um, there are you know people who are in these these top leadership roles who really make a lot of decisions and can hire people. There are a lot more especially black women now than there were two years ago, but but not in but they are in in writer positions not in editor positions. And so we still have a long long Go it's not. always presented as a career option and it's something that Is something that has been a source of real frustration for me, especially amongst journalism organizations because they don't think of dining or or as food as relevant or it's soft news, which is dumb, you know is like right and and then there's this idea that you know that that it's it's a feminizing the news which is a very very strange idea. And so it's been a real challenge to get I mean the LA Times just you know killed it's it's Standalone food section was just one of the best ones in the country. So it's a real Challenge and and sometimes people will think about oh, I want to be a celebrity report like they want to be in features like, oh I want to be a music writer. I want to be an entertainment writer. I want to cover I want to cover, you know concerts but they don't think about well dining is is just as is just as important as music and so That has been like from that something that has to be addressed at the journalism School level and it also has to be addressed at the culinary school level. Here's how you write about food. And here's how you learn AP style and it's and I you know, I saw a tweet today saying like, how is it that people who how do these food critics get to get to have this job without working in restaurants and it is it's because we went to journalism School and and so we need more people who are in culinary school to have that kind of training because you know at this level at the level of I am I don't really have time to teach somebody like Associated Press style which is like the standard but that's something that needs to happen at the culinary school level and like so there's a lot of opportunity.