Join us for a conversation about Culinary Culture and Mental Health with Chefs Nephi Craig and Chris Rodriguez. This is the fourth episode in the series called Pull Up a Chair, featuring the Rouxbe team in discussion with various leaders in food-spaces on diversity, equity, and inclusion throughout the broad landscape of food.

We welcome back Chef Craig to share his journey through mental health, sobriety, and recovery. Chef Craig recently stated that the pandemic has presented a “strike while the iron is hot” opportunity to abandon old toxic culinary culture and practices and build new work environments that promote work-life balance, self care, and nutritional recovery. 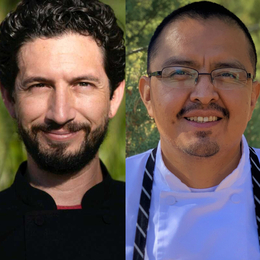 Chef Nephi Craig has 24 years culinary experience in America and around the world in London, Germany, Brazil and Japan. Nephi Craig is an enrolled member of the White Mountain Apache Tribe and is half Navajo. Chef Craig is also the founder of the Native American Culinary Association or NACA, an organization/network that is dedicated to the research, refinement, and development of Native American Cuisine.

Chris Rodriguez grew up between Los Angeles and Baja California with ancestral roots in the Iberian Peninsula (Spain, France, and Basque Country) and across Northern-Central Mexico. He is the descendant of classically trained chefs, crystalized by the culinary legacy of his great-grandfather’s bacalao a la vizcaina, still prepared by his family to this day.

As a father and mutual aid chef organizing community-based access to the ecological stewardship of the land, Rodriguez is actively engaged in the development of local institutions such as a land trust, community gardens, mutual aid kitchens, a homeschool, and grassroots community health projects.

He holds a Bachelor of Arts in Gender, Ethnic and Multicultural Studies; as well as a Bachelor of Science in Hospitality Management from California State Polytechnic University, Pomona.