Knowledge Base > Adante Hart & Njathi Kabui - Pull Up A Chair: Food and Futures 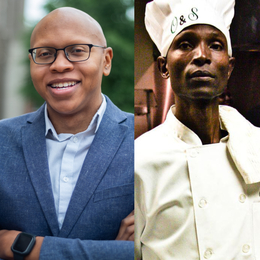 Join us for a conversation about food literacy, Black history, and Black food futures with Chef Njathi Kabui and Adante Hart, RD. This is the first of a series called Pull Up a Chair… Read More.

Are there any sectors of society in the U.S. that you can say are in fact food literate?

Oh, yes. The literacy are then he plays that our food literate. Yes. Oh, yeah, the obviously people from especially religious communities, you know, some of the people from Asian Community seem to be quite for literate people who are in The people who what do you call those who write buggies that Community right buggies? I don't know. I miss people the Amish people are quite full lyrics that's interested. But also the people from The Seventh-Day Adventist, you know, they observe a fair a decent Health as well as people from the national Islam like Malcolm X Malcolm X when he was they did such a mess when he was assassinated. They found the people who operating or doing the the autopsy on the body. Say they had never seen body anybody a body more cleaner than that of Malcolm X, you know because it was eating very helpful, you know, so yeah, so some of the lessons from the brothers are quite quite quite an EQ, but the only challenge that I have is for especially for food to be religious then it's tends to be static. That's just the honest truth, you know. Well, so these books says mission is not okay, but what research that's the research of those days say that you know, but what about the research of today, you know, what does it say? So that's why I say futuristic that we should always look to the Future and make changes and be open to make change anything. There's nothing that I say. I have to eat, you know, there are things something is causing me death and saying that I have to eat this and it's causing me early that that's like say I have to die all you know, and that's what I call sorrow suicide and that's exactly what we're doing. We're we're causing sorrow suicide. Yeah, and there are two things you said they are one the first part about the communities. It seems that communities whether to be religious communities culture communities. Communities that have food as a kind of a core tenant of their their being of their beliefs tend to be more food literate. That's what's what I'm kind of what I'm hearing there. Yes, so culturally or does you know as a nation wherever you are having food be one of those core tenants is a way to become more food literate because it's a part of your belief systems a part of how you exist. So having that food be a part of that lead to food literacy. That's an understanding that I have.