Join us for a conversation about Food, Labor and Climate Change with Professor Enrique C. Ochoa and Chef Chris Rodriguez. This is the third episode in the series called Pull Up a Chair, featuring the Rouxbe team in discussion with various leaders in food-spaces on diversity, equity, and inclusion throughout the broad landscape of food.

During this conversation, you’ll hear from Ochoa about the global climate impacts of food policies and how they affect the local communities and cultures that produce identity crops like maize, and most importantly, how we can address climate change and the threats facing our global food supply chains.

Did you enjoy today's event? If so, please consider making a donation to World Central Kitchen as they continue to feed Ukrainian refugees. 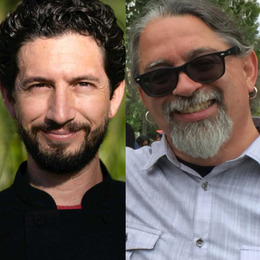 Enrique C. Ochoa (they/them/he) is professor of Latin American studies and history at Cal State Los Angeles. Enrique grew up on the San Gabriel Valley and was raised by his Sicilian American mother and his Nicaraguan father, both of whom were middle school teachers.

Enrique received their Ph.D. in history from UCLA and has been teaching at Cal State LA since 1995. In 2013-2014, Enrique was named the President’s Distinguished Professor, and from 2006-08, they held the Walter and Michi Weglyn Endowed Chair of Multicultural Studies at Cal Poly Pomona. The author and editor of multiple articles and several books, Enrique’s research focuses on Mexican and Central American history, food studies, Latinx studies, immigration, and teaching history and intersectional ethnic studies in K-16 classrooms and communities.

Chris Rodriguez grew up between Los Angeles and Baja California with ancestral roots in the Iberian Peninsula (Spain, France, and Basque Country) and across Northern-Central Mexico. He is the descendant of classically trained chefs, crystalized by the culinary legacy of his great-grandfather’s bacalao a la vizcaina, still prepared by his family to this day.

As a father and mutual aid chef organizing community-based access to the ecological stewardship of the land, Rodriguez is actively engaged in the development of local institutions such as a land trust, community gardens, mutual aid kitchens, a homeschool, and grassroots community health projects.

He holds a Bachelor of Arts in Gender, Ethnic and Multicultural Studies; as well as a Bachelor of Science in Hospitality Management from California State Polytechnic University, Pomona.