One of the most popular yet most difficult styles of food to master is Sushi.

Join Chef Barton Seaver and his special guest Chef Kazumi Wickenkamp for this special event exploring the cooking techniques and special skills required to master the art of Sushi!

Bring your questions and sense of wonder to see this unique food and how to prepare it. 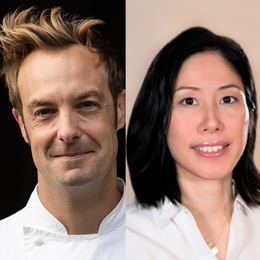 Kazumi Wickenkamp, originally from Japan, is the founder of Master of Japanese Cuisine Academy, the world’s first online academy specialized in Japanese cuisine. The academy’s mission is to provide the highest-quality education of Japanese cuisine to international culinary talents and food enthusiasts across the globe.

As Japanese cuisine’s center ingredients are seafood, Kazumi has a strong personal interest and concern in the seafood sustainability, and she became one of the first students of chef Barton’s Seafood Literacy class.

With the greatest passion for Japanese cuisine, Kazumi and her team are continuously offering high-quality programs of Japanese cuisine, not only for individual customers but also the enterprises which seek quality culinary training programs for their employees. In March 2021, the academy received the 2nd prize in the Japanese government-led awards for high-quality programs produced through unique partnerships with international companies.