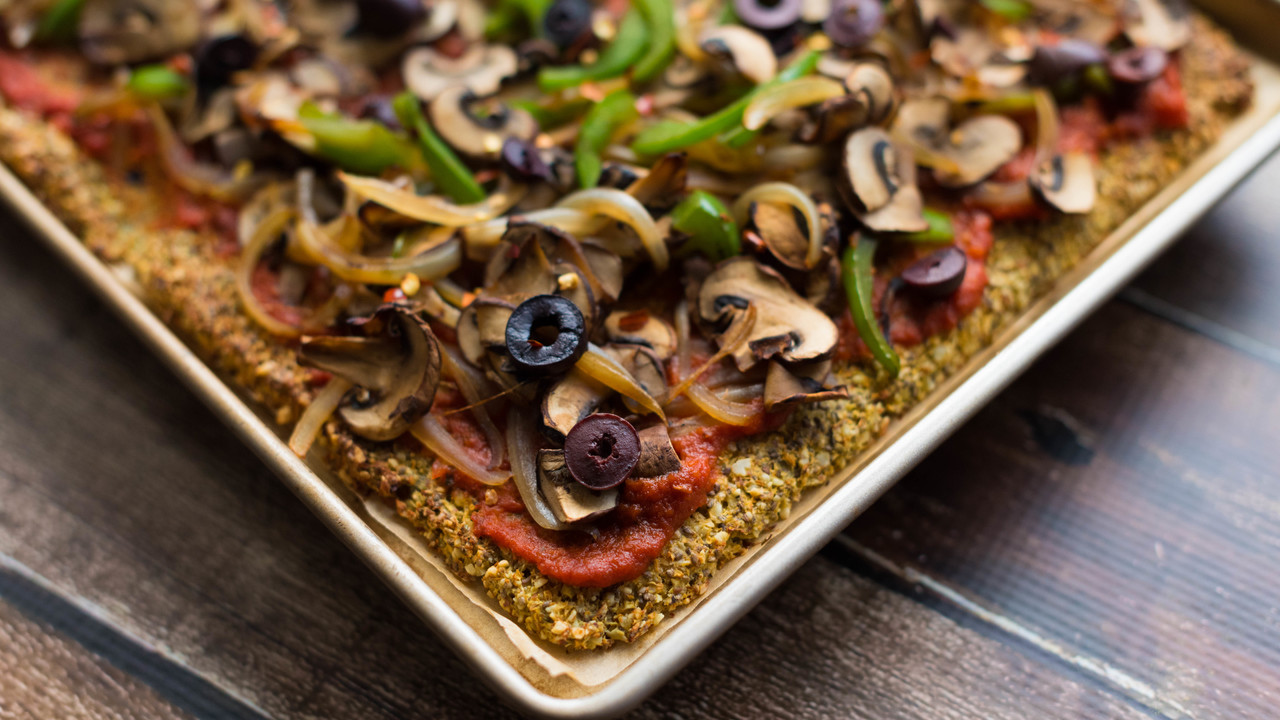 This non-traditional, yet highly flavorful, pizza-style dish is made with a cauliflower, ground almond, and chia seed crust. Top the crust with your favorite toppings and enjoy this healthy meal any night of the week. Dawn Thomas 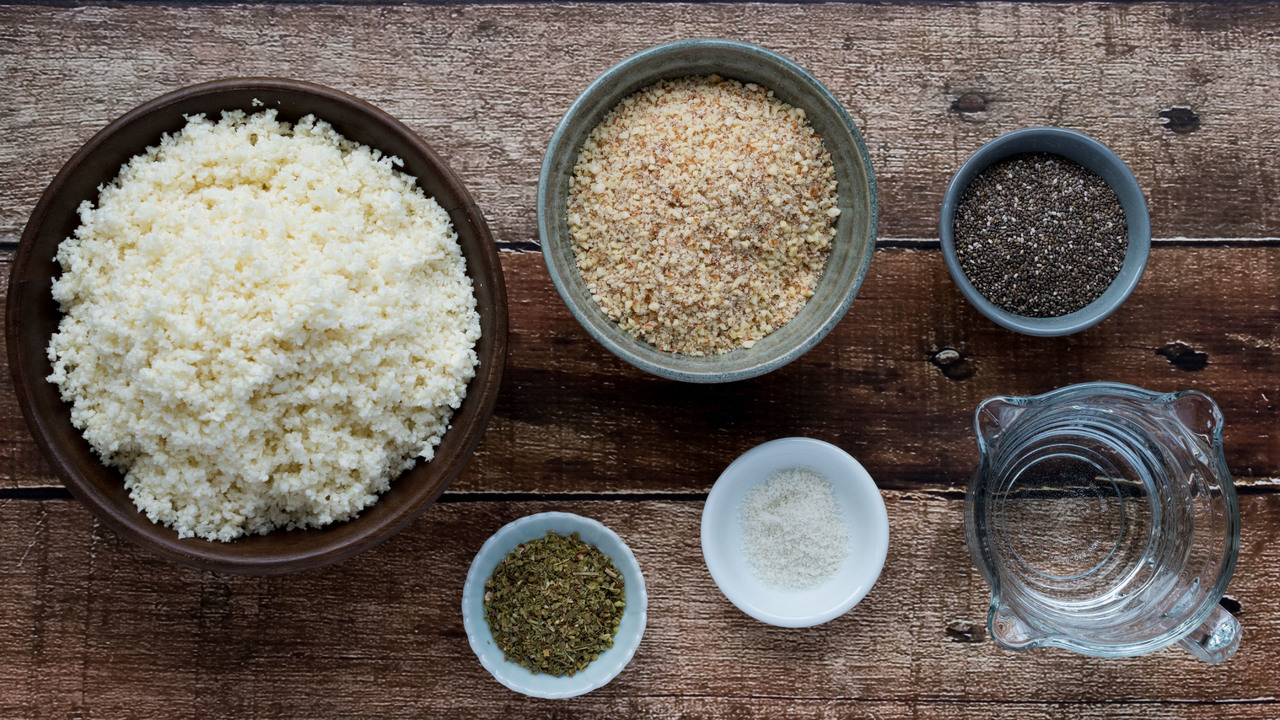 Note: This crust is not like a standard or traditional pizza crust. But it is healthy and delicious, so open up your mind to a new type of “crust”.

To make the crust, combine together the chia seeds and water and let sit for at least 20 minutes.

Measure out 3 cups of the cauliflower and place into a large bowl. Add the ground almonds, oregano, salt, pepper and nutritional yeast (if using).
Make a hole in the center and add the Chia mixture.

Note: Other flavorings, such as garlic and/or onion powder can be added to the crust if you like.

Using your hands, combine the ingredients and shape into a rough ball. The mixture will obviously not resemble a traditional flour dough.

Next, place the mixture onto a sheet pan* lined with parchment or a silicone mat and form into an even flat crust — making sure that the sides of crust are the same thickness as the middle, otherwise they will burn more easily. If desired, the crust can also be shaped into individual pizzas.

Bake the crust for approximately 20 to 25 minutes, or until golden brown around the edges. At this point, the crust could be used as is, but it won’t be firm enough to lift with your hands. For a firmer crust (which we recommend), carefully flip the crust onto the back of another baking tray that has been lined with a clean piece of parchment. Next, carefully lift or slide the crust back onto the same sheet pan and then gently and slowly remove the parchment paper from the top of the crust. Place the tray back into the oven and bake for another 5 minutes or so.

Note: The amount of time will ultimately depend on the thickness and size of the crust, your oven and how firm you want the crust to be. 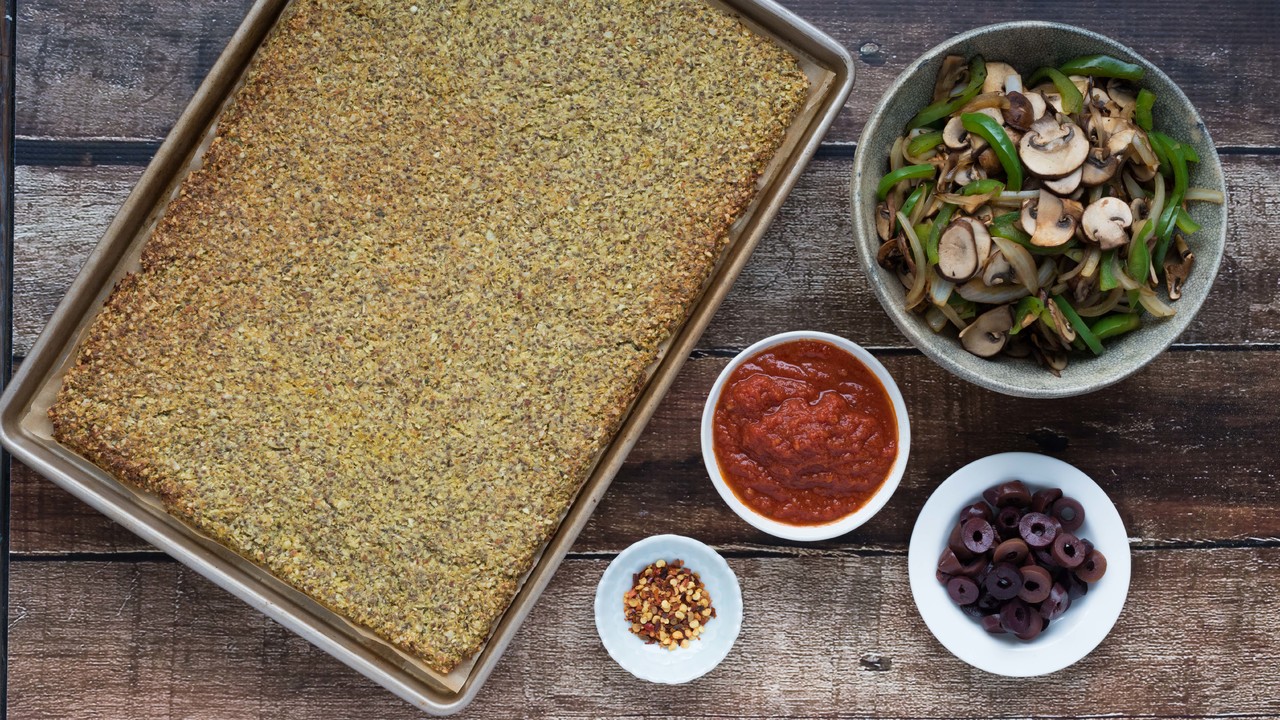 To assemble the pizza, either top with your favorite toppings or use the ingredients listed as inspiration.

For this particular combination of ingredients, it is best to cook the ingredients first. To do this, heat a large fry pan over medium to medium-high heat. Once hot, add the onions and dry-sauté for a minute and then add the mushrooms and let cook for another 2 or 3 minutes, or until most of the moisture has evaporated. Next, add the green onion and let cook for another minute or so.

No matter which vegetables or ingredients you use, keep in mind that they will not really get cooked in the oven. So if you want them cooked once the pizza is done, you will need to do so before you add them to the pizza.

Next, spread a thin layer of the sauce onto the crust and top with the vegetables, sliced olives, and chili flakes. If desired, top with your favorite non-dairy cheese. We like to add dollops of Kite Hill Cream Cheese. Bake the pizza for another 5 to 10 minutes, just to fully heat the crust and toppings through.